Recently I’ve been going through some of the free Linux games to see what ones I liked. Two of them I have come across are “Battle for Wesnoth” and “Savage 2”. 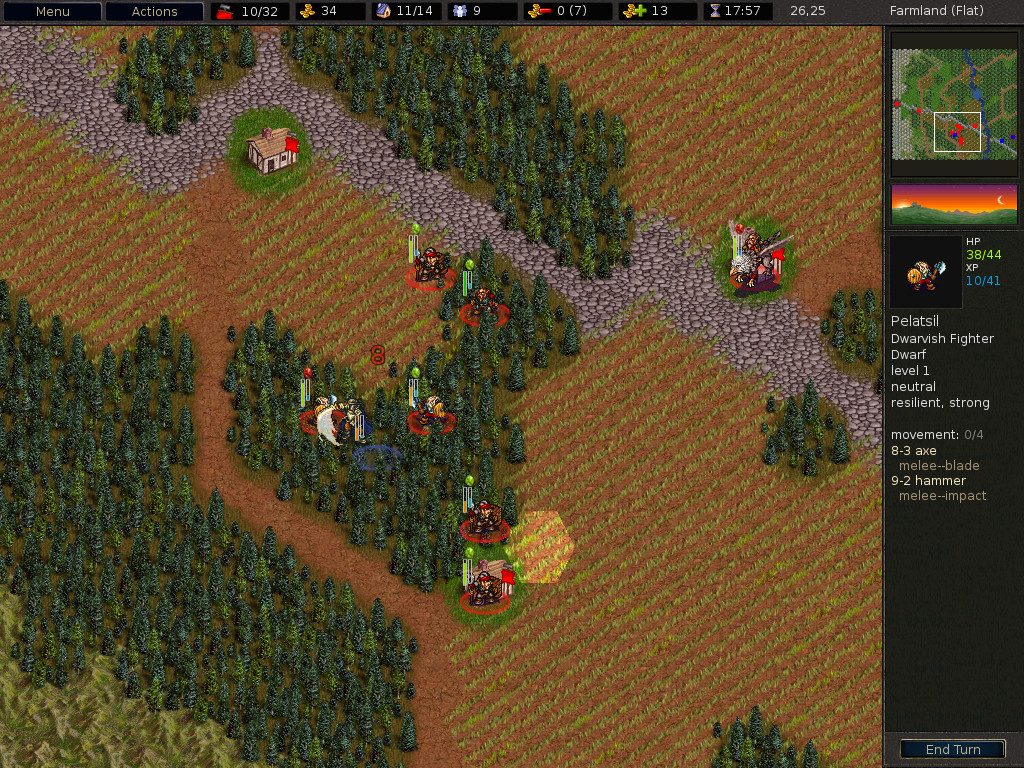 This game is very similar to the “Heroes of Might and Magic” series.  It’s a turn-based strategy game that I believe does fairly well; especially considering the price tag.  There are no “battle scenes” like in the HoMM games, battle is done just watching the smaller creatures hit each other and a red number to show how much damage was done.  Also, the castles; you don’t “go into” them and build stuff like in HoMM; but simply have your main character there and “recruit” new units, you get more units as you go through the campaign, or get all of them when playing multi-player.

Overall, an excellent game to waste time.  Simple enough that my 6 year old is able to play it effectively and loves doing a network game with dad.  The other very nice thing about this game is system requirements.  For the earlier versions it requires only a 400mhz CPU and 128MB ram, the newer ones they recommend 1ghz and 512mb ram.  If you follow my blog, you’ll know I have both a “Nokia Internet Tablet N810” and an “Acer Aspire One Netbook”.  These are 400mhz ARM, and 1.6ghz Atom processors respectively.  Both of these machines will run this game.

Now this game is a beast.  It’s a real 3D, and very intensive game.  I look at this game and am amazed that they offer this thing for free.  Granted, you get some special extras if you pay for a premium account – but at least you have the *option*.  And UNIQUE.  The idea behind this game is truly amazing.  It combines aspects of your typical RTS (Starcraft/Warcraft) games with the MMORPG/FPS gameplay that World of Warcraft, Everquest, etc. made so popular.

How does it do this?  Well, I haven’t played it a LOT but my understanding is you have a “Commander” on each team.  The commander see’s the game like an RTS, toplevel birds-eye view of the buildings and stuff.  They build the little repair guys and make new buildings.  But, unlike a normal RTS, the military grunts on the ground are not under the control of the commander.  They are the other players.  Yup, you connect to the server and you can play the game as an MMORPG fighting on the ground while your “commander” issues you orders on where to go, etc.  That’s just genious.

The one thing I see being a problem, is that the characters are not persistent (I don’t think).  Meaning every time you start into a new match you go back to the beginning level character and you progress in the match.  Your experience and levels are recorded on the savage 2’s servers and you move up their “player ladder” list, but I think it would be a bit nicer to find a way for me to make one character like your MMORPG’s and level him up by joining different “worlds” or whatever.

Other than that one thing however, this game is very beautiful, fun, and rivals, IMHO – even the most expensive pay games (EVE, WoW, EQII).  Only money isn’t a “requirement” on this one, and even if you do decide to pay it’s a one-time fee of $9.99 for a “premium” account and that’s it.  No monthly junk.

The system requirements for this one are obviously significantly higher :

This obviously means my poor little N810 and AAO are out.  So I need to play this on my gaming machine, which I don’t sit at often and thus, don’t get to play as much.  But for you gamers out there… definitely worth a look!